System Restore is one of the better features in Windows 7 and Vista… spend any amount of time on our forums and you’ll see how often it solves issues… but it’s like a black box, nobody knows how it really works, or when it’s doing things. So how do you change when it creates snapshots?

Windows 7 or Vista uses the built-in Task Scheduler to kick off most maintenance tasks, instead of requiring something to be running all the time. By going into Task Scheduler we can actually change the schedule of main system tasks, including System Restore.

Once you’ve got Task Scheduler open, look under Microsoft Windows SystemRestore on the left-hand pane. 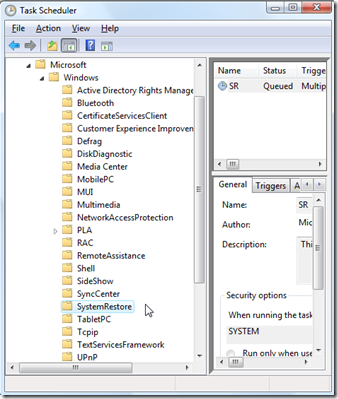 Now you’ll see a single item in the middle pane that says “SR Queued Multiple triggers defined”. Double-click on that item to change the details. 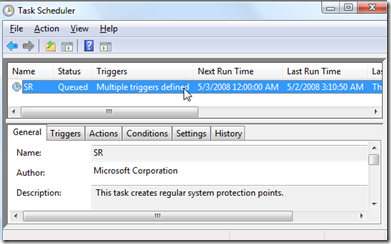 The Triggers tab is the first place you’ll want to look, and you’ll notice that by default System Restore is set to run at startup(more on that below), and at midnight every day. 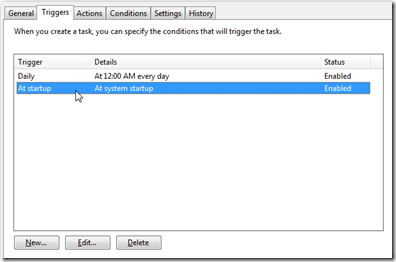 The Edit Trigger dialog allows you to change all sorts of settings, the first one to notice is that the “At startup” task is set to also “Delay task for 30 minutes”, meaning that the system restore task won’t happen during boot. 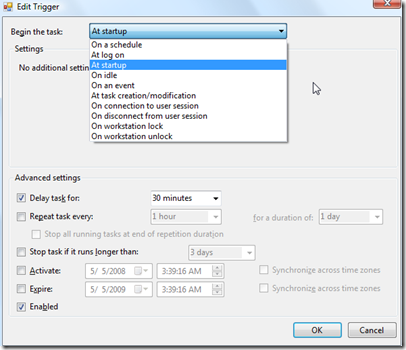 If you look at the other trigger that is scheduled for midnight, you can choose the time of day that it runs… midnight might not be the best time for you, so you can change it to some other time if you’d like, or even schedule it to run weekly instead of daily.

The Conditions tab allows you to tell the task that even though it’s set to start at a particular time, it still shouldn’t start unless the computer is idle, or not to run on battery power.

Note that this overrides anything set in the Triggers section, so even though by default Vista schedules System Restore for 30 minutes after startup, it won’t kick in if you are using the computer. 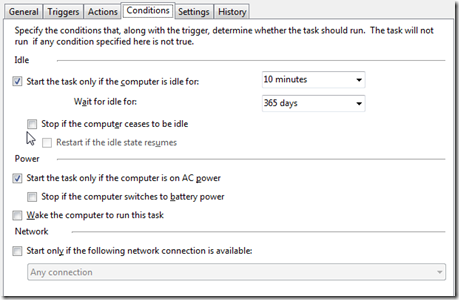 One of the more interesting settings here is the option to “Stop if the computer ceases to be idle”, which means that even though System Restore might kick off after 10 minutes of idle time, it will stop if you come back to the computer. It’s also interesting to note that according to these settings, a computer only used on battery power will never have a restore point created… interesting.

The History tab will show every time the task has run in the past, and what the output was. 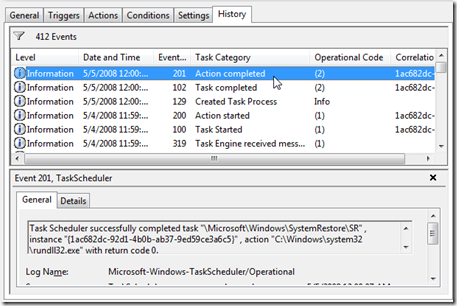 I wouldn’t recommend changing the default settings too much, because system restore is a very useful tool. You should also keep in mind that installing software usually automatically triggers a restore point, or you can always create a restore point manually.